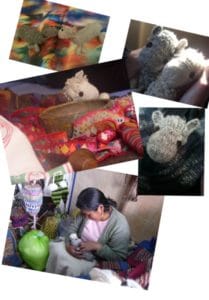 “Once upon a time, two small sheep figurines, a gray and a white one adopted by Ayud’Art in Cusco in August 2007. On their way to France where they would be sold by Ayud’Art for CIMA, the two figurines were in the president’s bag when a powerful earthquake came out shaking the bags as well as the humans. Nevertheless they took the plane for the “old continent”. Months past but nobody could sell them, they had been survivor partner of a timeless moment. ?

The following year, they were brought back to their native land to find the knitter that created them in order to create a wool livestock that could be sold. From markets to workshops, from stalls to meetings, nobody could give us information. Who could have knitted these little creatures?

The meeting was as incredible as this nice morning in August, on the edge of the Piuray laguna, 11 237 feets above the sea.

Cleofecelia is the representative of a knitter community and she tells us about her work conditions.